Dear Readers -
Thank you so much for supporting us over these past couple of years. We appreciate your readership / views / comments and think the world of you. We decided to take it up a notch so to speak - we moved our blog over to http://www.ladieslotto.com while awaiting the launch of our new WEBSITE!!!!
Please visit us at http://www.ladieslotto.com and update your subscription feeds.
Thank you again for reading our musings. We hope to continue our kick ass perspective on culture as well as grow into a more active role.
XOXO,
Ladies Lotto
Posted by imelectric at 9:14 PM 241 comments:

PARTY WITH STYLECASTER AT SXSW 2011!

Artists: Dan Deacon, Pains of Being Pure at Heart, Heavy Hawaii, Dirty Beaches, Diamond Rings, Writer, Manhattan Murder Mystery, Austra, We Are Enfant Terrible, Computer Magic, TV Girl and Superhumanoids
Don't forget to tweet @StyleCaster with #AustinHTL at the event!
To see all the latest SXSW coverage from StyleCaster, be sure to visit http://www.stylecaster.com/topics/38873/sxsw-music-festival!
Posted by clickclash at 7:47 PM 5 comments:


As American society becomes more diverse and integrated, pressure and discomfort remains when talking about racial and ethnic differences and designations. President Obama's background and ancestry has brought a lot of discussion and sometimes confusion..."Why does he say he's Black when he's bi-racial?"

I self-identify as a woman of color.  As a "mixed" or biracial woman, it has been a comfortable label and I've often felt that it's clearer when people ask or I have to explain. But I've never known the origin of the term "women of color," or honestly thought about it how the term came to be.

In the above clip, Loretta Ross, reproductive justice founder and National Coordinator of the Sistersong Women of Color Reproductive Justice Collective, discusses the origins of the phrase "women of color" and the difference between political identity and biological identity. The designation "women of color" was a political strategy not just cavalier terminology. It was a call to action demonstrating the power and strength in numbers of voices of marginalized women. She asks us to think about our reasons for holding onto specific identities.

Watching this clip I'm reminded of the importance of knowing our history as women in this country and all over the world so that we have some proper context to what's happening in our current lives as "modern" women. It also reinforces the idea that women working together are a force to be reckoned with!
Posted by Unknown at 10:22 PM 3 comments:

That's ALLEGRI: Serving Up Fashion and Food the Italian Way 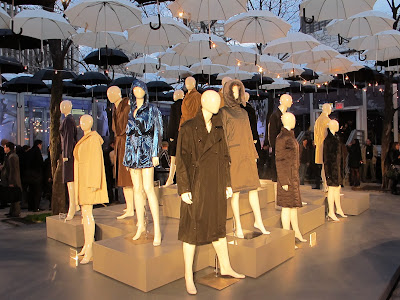 Italian outerwear label ALLEGRI celebrated their 40th anniversary last month with a presentation during New York Fashion Week at Lincoln Center. The presentation was located in the Courtyard, with a partial covering from the elements constructed out of hanging, opened umbrellas. Past ALLEGRI creations for designers like Giorgio Armani and Martin Margiela were on display on a group of mannequins, arranged in the center of a platform. On that same platform, the Italian private label had live models walk around the mannequins, wearing the latest Fall/Winter 2011 collection from the Milano-based fashion house. 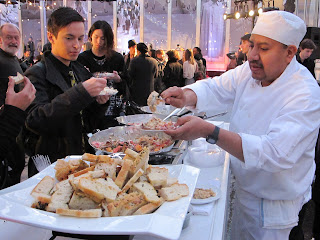 The ALLEGRI presentation also had some suttle homages to the motherland such as the night's soundtrack consisting only of Italo-disco, Italophones in the crowd conversing in their native tongue, and gourmet pasta dishes being served to attendees. And what goes best with pasta being served during a NYFW presentation? Some Kim Crawford wine of course! Thankfully there were a few bottles of the delicious New Zealand wine on hand at the presentation that many of the fashionably guests got to enjoy. 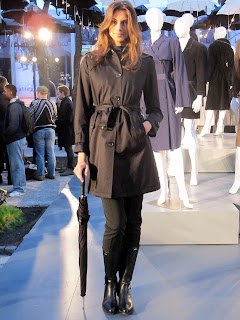 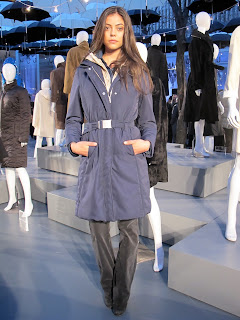 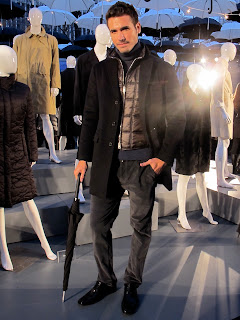 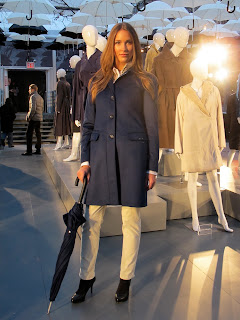 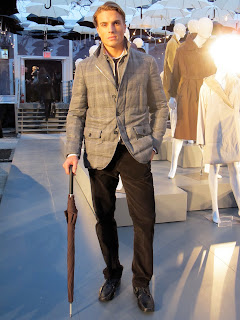 NYC: How RARE Is Your Hair? 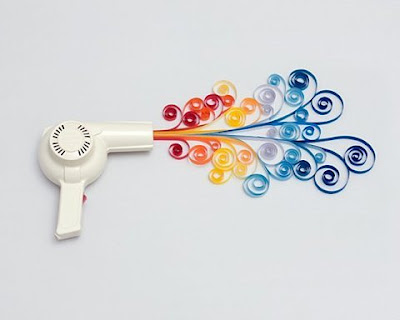 Tons of salons, spas and other pleasure palaces (not that kind) are offering deep discounts on services via Living Social, Groupon and other copy cats. However, how do you know who you can really trust; especially when it comes to your tresses? Have you seen Jessica Szohr's crazy beautiful hair? Do you love its luster and bounce?

Now you can get the star treatment from the same team that gives my favorite Gossip Girl her fabulous hair-dos! From now until March 15th you can purchase four (4) RARE blowouts for the price of (3); only $165! Snatch this deal up and use it before it expires on April 20th.

The RARE team has worked with marquee names including Laura Linney, P!nk and celeb photographers Annie Leibovitz and Gilles Bensimon. Celebrity stylist Ruth Roche serves as the Founder and Creative Director of the RARE brand mission. Owner and Principal Stylist, Fatimah Sheikh has merged her F.S. Charlie brand with RARE to create unparalleled service in the hair arts.

Photo via FFFFOUND!
Posted by grahamatical at 6:28 PM 7 comments:

Who doesn't love a mixtape?

My friend Yoni aka Sneakas has just released Hebonics 101 hosted by Peter Rosenberg from Hot97 & presented by MC Search (Back to the grill, again).

My favorite track...Hebonics 101, Sneakas take on Big L's Ebonics, Good Day & I'm an American what can I say I'm a sucker for some yiddish with my rapping. Old World slang.

You'll have to pay attention Sneakas punch lines come at you hard and fast..... that's what she said.
Download it now!

Download Here: Sneakas Hebonics 101
Posted by Anonymous at 9:56 AM No comments:

Babylon Creatures - A Tribute to Ari Up and Lux Interior 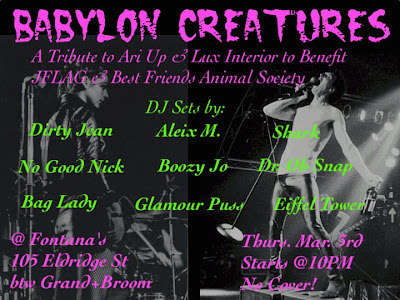 Come down to Fontana's basement and celebrate Ari & Lux. All proceeds will benefit JFLAG and Best Friends Animal Society. No cover but donations encouraged! A stellar dj line up spins punk, garage, RnR, reggae, dub, ska, dancehall and beyond for your dancing pleasure!

Posted by grahamatical at 4:52 PM No comments:

Posted by imelectric at 9:14 AM No comments: 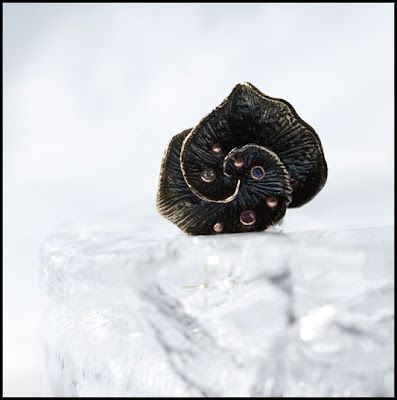 When I first heard about Choo Yilin Artisan Jewelry, I was intrigued by the idea of eco-friendly luxury and using jewelry design as a social messaging tool. Design-driven precious jewelry wrapped up in an environmentally conscious package, an admirable concept.

Since launching in 2009, the label has won two grants to show in London and New York, as well as multiple international design awards. No small feat for a former political analyst from the tiny island-state of Singapore. In a life-changing move to Bangkok, Thailand in 2007 as an expatriate spouse, Choo was left wondering about her next career move.
Between her philanthropic work and small-scale jewelry business to private clients, Choo soon found her calling when she started working with the traditional Karen hill tribe artisans in northern Thailand. The collaboration not only created awareness and support for a marginalized group, it also allowed her to plunge full-force into producing sustainable yet extravagant jewelry.
Each of Choo’s ready-to-wear collection tells a story of environmental or social conservation. Her “Alternative to Coral” collection is crafted from natural gemstones and 99.9% reclaimed sterling silver, with some pieces gilded in eighteen-karat gold and black rhodium. The organic shapes are mostly asymmetrical; a nod to nature’s imperfect beauty.
“The collection was an homage to the beauty and the necessity of the survival of coral reefs,” said Choo. “Instead of using real coral that has been used traditionally in fine jewelry, we created jewelry pieces heavily inspired by coral reefs around the world.”
Choo is the first Asian jeweller to reach out and sign Too Precious To Wear’s pledge- a non-profit promoting marine conservation and awareness against using live coral in jewelry. Driven by the campaigns and missions of non-profit groups, Choo actively weaves their ideas into her jewelry design. Her latest collection due to unveil in May, is dedicated to forest conservation and evoked by the United Nations declaration of 2011 as International Year Of The Forest.

Since the inception of the brand, Choo has tried her best to “green” her supply chain where possible. Her best-selling collection is a fusion of textured vermeil embellishment over classic jade pieces. Despite incurring higher production costs, she chooses to import jade from China because of the political ban on Burmese exports to the US. Though it is nearly impossible to acsertain the origin of the raw materials, Choo prefers to maintain complete honesty of her sources in order to protect the integrity of the label.
“Our rationale was that we felt in the bigger scheme of things, conveying this inadequacy was more important that maintaining a façade of perfection,” she said. “We needed to highlight a seemingly intractable issue in the industry and acknowledge that we could not evoke the necessary changes by ourselves.”
From a modest investment capital and a purposeful dream, the young entrepreneur has built a profitable label with solid ethical values. It is impressive and inspiring to see the grit, determination and class from which Choo runs her business. Her passion for change and originality is clear.

“Coming from a background as an artist-designer whose primary mission was to create original work, I was especially inspired and challenged by Bornstein’s (book: How to Change the World) accounts of individuals that had created business models that were unique in the market space and were essentially tearing down the status quo for good,” muses Choo. “I realized in retrospect, there were some similarities between a designer and a social entrepreneur – this desire to create original designs that were better than the status quo. I was inspired to do the same.”

Ladykillers by LUSH
http://www.youtube.com/watch?v=oMFGuzgIGLE
Do you remember this one? A big 90's tune by the female heavy British band LUSH. On the heels of "girl power" Lush seemed legit with this single about the trials of being the pick up subject of rico suave narcissists lurking out there.
Posted by imelectric at 5:22 PM No comments: